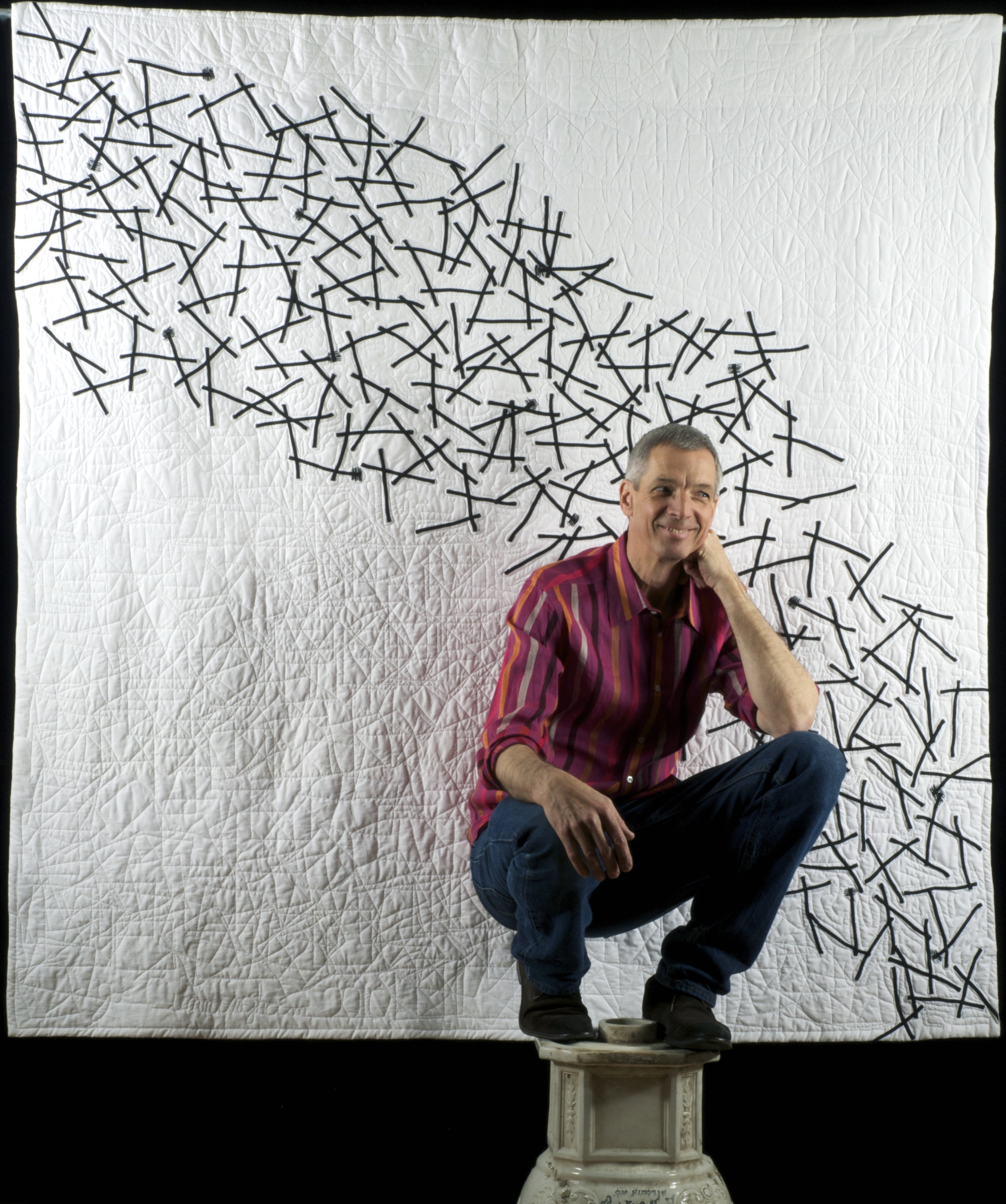 Quilt artist Joe Cunningham will speak at the GAAQG Quilt Day January 21, 2017. He will also teach two, one-day classes on January 20 and January 22. All three events will be held at the Morris Lawrence Building on the Washtenaw Community College campus in Ann Arbor. Sign up online at GAAQG Workshops.

Cunningham is a world-renowned artist who has been making quilts professionally since 1979. He lives in the Presidio of San Francisco, a few hundred yards from the Golden Gate Bridge from whence he recently shared his thoughts.

GAAQG: Your online bio says you were a musician before becoming a quilter; what was your instrument and what style music did you play?

JC: I worked as an all-around guitarist in mid-Michigan in nightclubs from the time I was 15. I worked primarily as a rock guitarist in and around Flint. I never worked with anyone famous.

GAAQG: Do you think being a musician influences your fiber work?

JC: I think studying any kind of art in depth affects your artistic imagination and broadens your idea of what is possible. What being a musician taught me was to be open to improvisational elements — that sometimes those are the only things that will get you where you need to go.

GAAQG: Do you have an opinion about the tension between so called modern quilting and traditional quilting?

Modern quilt-making, being based on the teachings and the style of a few quilt artists, is antithetical to the development of a personal style, which is all I am concerned with. I want people to make work that reflects their individuality, not work that succeeds at conforming to some set of rules or guidelines.

So, what I am seeking in the quilt world is anarchy, such as I saw in the work of women from the nineteenth century, not anything that looks like someone else’s idea of what a quilt should be. The good thing about “modern” quilt-making, in my view, is that it has removed the element of country from the working quilt aesthetic, thereby making it okay for younger people to get interested in it.

GAAQG: Who were your early influences?

(Ed.: Cunningham wrote Mary Schafer and her Quilts with Gwen Marston in 1991.)

GAAQG: Do you think that fiber is now as respected as other more permanent artistic media?

JC: I think fiber is becoming accepted as a part of the standard art toolkit. But the world of art is changing in so many ways, in so many directions, that in order to keep up with it we fiber people will also have to run and evolve as fast as we can.

GAAQG: Can you tell us about your experience with the PBS Craft in America series?

JC: Working with Craft in America was a dream. The producer, Carol Sauvinion, came to see me in my San Francisco studio. We hit it off. She asked me what I would like to do if I was going to be featured in a segment and I said I would like to take a video crew to Gees Bend, Alabama, and to visit the quilters there, friends of mine that have visited me here and that I had visited a couple of times already. So that is what we did. Then we flew back to San Francisco and shot an interview in my studio. It was fantastic. I loved the whole process and I got a bunch of new friends from it. Truly a high point of my life.

GAAQG: What do you want your students to know before they come to your class, and what do you feel would be the best result of your class here in Ann Arbor?

JC: I would like students to know how to operate a sewing machine, and that they should not bring fabric that is coordinated to go together.  I would be happy if people came away with the idea that they could truly do whatever they want with quilts, and that they had to please no one but themselves.

GAAQG: Have you been here before? Is there anything you are hoping to take-in while you are here?

JC: Growing up in Flint, Ann Arbor always represented the closest place for me to experience the culture I was looking for. So, from the times I went to A2 for concerts — like the Free John Sinclair rally with John Lennon, Stevie Wonder, and many others — through the times I used to go hear Boogie Woogie Red at the Blind Pig, or the Steve Nardella Band with my friend Mark Braun on piano, to the times I played at Mr Flood’s Party with my act The Suttle Brothers, I have always loved Ann Arbor.

GAAQG: Where are you going next?

JC: From here I am going to the International Quilt Study Center and Museum in Lincoln, Nebraska, to give the inaugural lecture in a series named for the late Mary Ghormly, whose family has endowed the series. I’l be teaching a workshop and giving a lecture about my view of quilt history.

GAAQG: What are you looking forward to?

JC: After spending most of the last few months on the road, I am looking forward to spending the next month and a half in my studio, creating some new classes and starting on a new series of quilts. Having started on a new book, I hope to have a lot of it done by the time I get to GAAQG. It will have the stories of my last 20 years of quilt making and pictures of my unpublished quilts.  In Ann Arbor I am looking forward especially to seeing my friends [pianist] Mark Braun and [artists] John and Candace Pappas.

Cunningham’s lecture will be held during the GAAQG meeting January 21, 2017. The GAAQG meeting begins at 9:15 a.m.; doors open at 8:15 a.m. Everyone is welcome; non-members pay a $10 fee, or ask for the sponsorship of an attending member to attend the meeting at no cost.

This lecture follows the business meeting on Quilt Day.

Unfortunately, due to the COVID-19 crisis,

On July 25-26, 2020, GAAQG will hold its 16th Biennial Quilt Show, “Celebrate the Quilt 2020” at the Morris Lawrence Building at Washtenaw Community College.  Every even-numbered year, GAAQG members create items to enter into this non-juried show.  Our show draws more than 1,200 quilt enthusiasts from throughout southeast Michigan and beyond.  This dynamic show features more than 250 member-made entries hung in the main show and Special Exhibits; 25 vendors, door prizes generously donated by our quilt show vendors, and a Bid or Buy Bazaar (formerly called the Silent Auction).  Show hours:  Saturday, 9:00 am – 5:00 pm; Sunday, 11:00 am – 5:00 pm.  Admission:  $6.00 (1 or 2-day)  For more information, check our Quilt Show page. 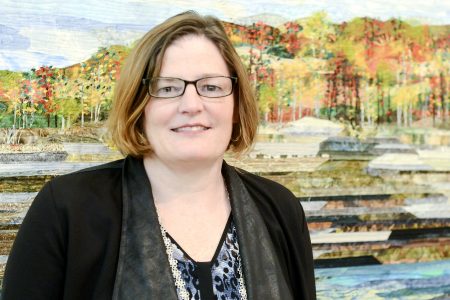 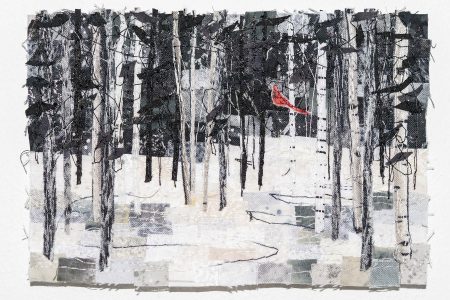 Appropriate level: BEGINNERS ARE WELCOME IN ALL OF ANN’S WORKSHOPS!

We will make a mosaic-like art quilt using fusible web and free-motion machine quilting. Ann will provide backing and mat board to mount the finished quilt. Students may choose any of Ann’s mosaic designs by looking on her website.

Ann Loveless is a native of Frankfort, Michigan. She attended Michigan State University and received her degree in Clothing and Textile Design. In 2004 Ann fell in love with the art of Landscape Quilting. Ann’s inspiration and designs come from nature and the beautiful lakes and woods of Northwest and Upper Peninsula of Michigan. She works from photographs and has developed three distinctive quilting techniques. Ann is the 2013 and 2015 first place winner of Artprize in Grand Rapids

Workshops are open to both guild members and non-guild members. Because the cost of the workshops is subsidized by members’ dues, non-members are asked to pay an additional $15 per workshop. Non-members will be able to register for all 2020 workshops after December 1, 2019. Workshop registration policy.

Online registration is available for members; non-members should contact Brenda Rigdon, V-P Programs, at programs@gaaqg.com to register or be placed on the waiting list. (If you prefer to write a check and mail in your workshop registration, please download our printable form.)